For Christ did not send me to baptize, but to preach the gospel, not with wisdom of words, lest the cross of Christ should be made of no effect.  For the message of the cross is foolishness to those who are perishing, but to us who are being saved it is the power of God. For it is written: “I will destroy the wisdom of the wise, And bring to nothing the understanding of the prudent.”  Where is the wise? Where is the scribe? Where is the disputer of this age? Has not God made foolish the wisdom of this world? For since, in the wisdom of God, the world through wisdom did not know God, it pleased God through the foolishness of the message preached to save those who believe. For Jews request a sign, and Greeks seek after wisdom; but we preach Christ crucified, to the Jews a stumbling block and to the Greek foolishness, but to those who are called, both Jews and Greeks, Christ the power of God and the wisdom of God. Because the foolishness of God is wiser than men, and the weakness of God is stronger than men. For you see your calling, brethren, that not many wise according to the flesh, not many mighty, not many noble, are called.   But God has chosen the foolish things of the world to put to shame the wise, and God has chosen the weak things of the world to put to shame the things which are mighty; – 1 Corinthians 1:17-27

“Common sense is not so common.”  – Voltaire

For many, this quote is one of the greatest understatements of all time.  Since being penned by Voltaire in the 18th century, we’ve seen this same idea repeated in many forms by authors, philosophers, artists, comedians, and politicians (although I suppose many of those categories could be combined).  We see evidence of it most every day of our lives in so many forms we couldn’t possibly keep count.  People make silly decisions without taking the time to think through all of the potential outcomes.  Choices are made which defy logic or demonstrate a lack of understanding or from the intent to do harm to someone else.  In most cases we can’t correct the bad decisions of others, so we take great pains to guard and protect ourselves from them, and if possible – report to others what we have seen for educational and entertainment purposes.  After all, a lack of common sense throughout society is what makes people watching so enjoyable.  But then again, most of us don’t people watch with a mirror. 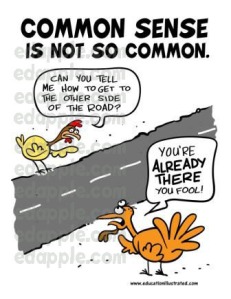 Isn’t it curious how we can so easily identify a lack of common sense in other people, but we rarely diagnose ourselves with the same condition?  And how interesting it is to see how people and organizations with whom we disagree are most lacking in what we consider common sense?  Because it seems that while most people have a clear understanding of what common sense is, they also have created that definition on their own in relation to their own unique situation.  So many people who we feel lack common sense really stand in opposition to the views and beliefs we hold to be true.  So this leaves me wondering if the “sense” to which we are referring is really “common”?

For something to be common, it needs to be widely accepted.  For example, it is common knowledge that you drive your car through the stoplight when it is green and you stop when the signal is red.  This color code is common throughout the United States and most of the world.  However, to say that driving on the right side of the road is common would be met with some opposition in England, where that traffic law is reversed.  So are the English uncommon, or do they simply have a different way of handling the matter?

Next comes sense, which again is a relative concept for most people.  So many variables factor into what we consider to be sensible and nonsense, it’s difficult to determine the best course of action for any given situation.  You could look at a situation and find multiple reactions that make sense.  You might also find one clear response that is appropriate right now, but have a totally different response make sense only a few moments later.

So we have two words filled with variables, coming together to create what we believe will be one clear and specific response that everyone should basically know.  Sounds to me like taking all the pieces of a car, putting them into a giant box, shaking the box for ten minutes and expecting to find a fully constructed Buick inside.

The only true common sense that we will ever find this side of heaven comes from the word of God.  By seeking the will of God in every decision that we make, we avoid the traps of personal ambition, bias and greed.  We find consistency in the message, comfort in His promises, and hope in the grace that can only come from the One who created, redeemed, and sanctified us – the Triune God.  The words of James 3:17 confirm this.  “But the wisdom from above is first pure, then peaceable, gentle, open to reason, full of mercy and good fruits, impartial and sincere.”  May we always seek the commonality of being a dearly loved child of God, developing a greater sense of the blessings He has in store for us through faith in Him.