For everyone born of God overcomes the world. This is the victory that has overcome the world, even our faith. – 1 John 5:4

Winning and losing.  It’s the difference between the good  and the truly great.  You can put up incredible numbers or possess superhuman ability, but if it doesn’t translate into wins, you will never be given elite status.  To be a champion, you must win a championship.

On the sports field, winners and losers are often recognized with ease, but in the day to day grind of our lives it doesn’t always work that way.  Take the game of baseball for instance. Baseball is a game where numbers aren’t just important, they’re legendary. The greatest players are measured by their numbers: 300 wins for a pitcher, 3,000 hits for a batter, or 500 home runs for a slugger. Achieve these benchmarks and you’re almost guaranteed a spot in the hall of fame as one of the all-time greats. I can spout off dozens of great players whose statistics prove they are truly the best.  But consider how this one statistic and may be a more accurate reflection of real life. 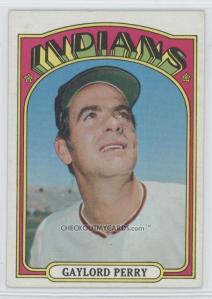 In 1972, Gaylord Perry of the Cleveland Indians recorded one of the oddest worst seasons in baseball history.  He appeared in 41 games and posted an incredible 1.92 Earned Run Average (meaning opponents scored less than 2 runs against him for every 9 innings he pitched all year).  But despite having such a low ERA, Perry still managed to lose 16 games.  So it begs the question, was it a great year or a lousy one?  Was he an asset or a liability?  Is he a winner or loser?

The answer is both.  He was highly successful in limiting the number of runs opponents scored against him, but lacked success because his team lost 16 games he started.  This mirrors life in the way we find ourselves in situations where we have no clear winner or loser, but experience elements of both.  Consider the last argument you had with the person you love most.  I bet you raised some good points.  Probably landed a few zingers and maybe even called him/her a few names to boot.  So at the end of the fight, who won?  You may have spoken your mind, but at what cost?  You may have cleared the air, but did you leave words lingering in that new air which will echo in your memories for a while, if not forever?

Does anyone really win a fight?  Can you claim a victory of any sorts when it comes at the expense of somebody you love?  Battles cause damage, damage must be repaired, and repairs take time, resources, and effort.  So are we really winning when we find short term victory at the expense of a long term defeat?  Hardly.

So how can we avoid this?  How do we break the cycle.  It comes in the changing of our focus from self to Savior.  On our own, we can’t win.  The Bible speaks of this clearly in several places.  Our best efforts, even if they are truly remarkable fall short without help.  Consider Gaylord Perry once again.  He won 24 games and gave his team a chance to win every time he stepped onto the mound.  But success was not up to him alone. He depended upon the actions of his teammates.  Had he thrown a perfect game, his teammates would still need to score at least one run to give him the victory.  He is incapable of winning the game on his own.

In life, we also find ourselves incapable of attaining our full victory through our own actions.  We may be kind, loving, generous, selfless, reverent, and even smell fresh, but unless our sins have been washed away in the sacrificial blood of Jesus Christ, we cannot achieve our ultimate victory of eternal life.  God has provided us with a great many gifts, and they will produce amazing kingdom blessings.  But what’s more, we receive abundant blessings even today as we live lives aligned with the perfect and precious will of our Father in Heaven.  This may not eliminate all of the losses, but through the work of the Spirit we can minimize the number of losses we face as well as the impact they have on us.

No matter how the numbers add up, we can be hopeful and victorious in the One who won for us the greatest victory imaginable.