Recently, NBA superstar LeBron James was asked which players he would place onto the “Basketball Mt. Rushmore.” He provided the names of four players: Michael Jordan, Magic Johnson, Larry Bird and Oscar Robertson – not a bad list by any stretch. All four of those players are all-time greats. But of course, anytime you ask someone an opinion question, you will spark a debate about the validity of the choices. 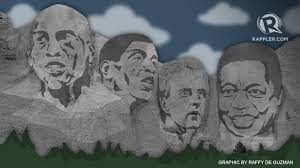 I have to admit that when I first heard his comments, I immediately thought he had missed one obvious choice: Bill Russell of the Boston Celtics. Having grown up as a Celtics fan, I learned about Russell’s accomplishments and felt he has become one of the most underrated players in NBA history; as underrated as an eleven-time champion can be. So it was fun for me to hear Russell’s response to LeBron’s list.

I’m not going to be critical of LeBron’s comments. First of all, it is his opinion – something he is free to have and share as he pleases. Secondly, I understand how easy it is to pick the players you have seen and know over guys haven’t. Lebron grew up watching Magic, Larry, and Michael. And Oscar Robertson played his college ball and most of his pro career in Cincinnati, Ohio, making his feats more prevalent to a kid who grew up in Ohio. Finally, arguments can be made for many other players to be on the side of the mountain: Kareem Abdul-Jabbar and Wilt Chamberlain are two names that could easily be considered, not to mention players currently in the league including the guy who started the discussion: LeBron James. This discussion could be had in every sport, but no clear cut consensus would ever be found. There are just too many variables, too many eras, and too many great choices. But the inability to reach agreement doesn’t end the debate; it drives it. So while we may never find agreement on the best of the best, we’ll continue to enjoy the lively debate.

So who is the greatest? Does it really matter? In 1980, the Soviet hockey team was considered the greatest in the world, but history celebrates the group of upstart American kids who for one game were able to outscore them. The 1969 Ohio State Buckeyes were en route to become arguably the greatest college football team ever until a single loss in Ann Arbor rewrote the history books. Twenty-one pitchers have thrown perfect games in major league history, but only five of them are Hall of Famers. Many are names you’ve never heard of or had forgotten over time. Does that mean that the perfect games thrown by Charlie Robertson, Philip Humber, or Addie Joss weren’t as great as those thrown by Cy Young or Sandy Koufax? Certainly not! The fans in the stands watched 27 come up and 27 go down. Maybe our fascination with greatness says more about us and our desire to find ways to measure ourselves against one another?

Jesus’ disciples had quarrels from time to time where they tried to rate themselves as the greatest among the group (Matthew 20, Luke 9). In each occasion, Christ reminded them that they needn’t concern themselves with such things, but rather they should devote themselves and their lives to God’s will, who by the Holy Spirit will do great things through them. Paul reminds us in Galatians 2:20 that “I have been crucified with Christ. It is no longer I who live, but Christ who lives in me. And the life I now live in the flesh I live by faith in the Son of God, who loved me and gave himself for me.” When we replace our petty, personal ambitions with the desires that God holds for our lives, we not only achieve far more through Him than we ever could on our own but we also become a greater blessing to those God calls us to serve.

Let the world decide whose face goes on the mountain. We will set our eyes upon the power of the cross.