But now, thus says the LORD, who created you, O Jacob, And He who formed you, O Israel: “Fear not, for I have redeemed you; I have called you by your name; You are Mine. – Isaiah 43:1

It’s been three years since hate visited Sandy Hook Elementary School in Newtown, Connecticut. As we come upon the anniversary of the shooting, many people will pause to remember the 26 people who lost their lives in that senseless act of violence. As a society, we will mark the occasion. News stories will run that will remind us of the day: recordings of 9-1-1 calls, stories of heroism from the people involved in the incident, video of stunned students being led from the school, the contrasting images of parents clinging their children in relief while others process the reality of their worst fear having come true. Journalists will speak with psychologists about lingering impacts. Experts will talk about the improvements made in school security. Pro & anti-gun rights activists will once again take up their sides in debate.

And then they will go to a commercial break, followed by a story estimating consumer spending for the holiday.

Sandy Hook strikes a nerve, but for many, it is just old news.

For those more directly connected, it isn’t “news” because they’re living with the consequences of it every day.

Ask Matt Lauer or Sean Hannity and they’ll remember the names of some of the victims.

Ask a teacher or a parent at Sandy Hook and they will name them all. 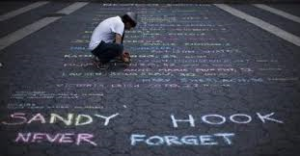 Names are important. Statistics are two-dimensional bits of data that can be analyzed and put into charts. People are three-dimensional, living beings who make an impact upon the lives of others. So as I pray today for the families observing this terrible anniversary, I will pray for them by name, but I’m not stopping there.

Since the shooting at Sandy Hook, many changes have taken place to increase security within our schools and other public places. The shootings also sparked a public debate and tremendous pressure to introduce legislation adding gun control measures. Proponents will tell you that within a year of the Newtown shooting, 194 children in the United States lost their lives to gun violence in the United States. That’s a lot of names that I now must add.

That is tragic, but sadly I can not stop there…

On average in the United States, we also lose and estimated 1.2 million children each year in abortion clinics. Sadly, I have no names for these children, so I am forced to look at them statistically, and not in the same 3-dimensional, vibrant way that I see the other victims through the use of their names. But that’s exactly how some people want it; numbers without names, a fetus without a face.

Isaiah 43:1 leaves no doubt how our Heavenly Father sees us: He has created us, called us by name – all of us. Imagine the pain He feels when he sees scenes of destruction, violence and murder. As Christmas approaches, we once again find ourselves calling for “Peace on Earth.” It’s a fine sentiment; one that can only be achieved for us by our Creator, Redeemer, Lord and Savior.

It is my prayer that as we seek Him this Christmas, we do so with humble hearts, celebrating the love of God who at this very moment is caring for all of our lost children by name.