The father of a righteous man has great joy; he who has a wise son delights in him. – Proverbs 23:24

It’s Father’s Day weekend, so I decided the best way to celebrate the occasion would be to spend time with my dad doing something we both enjoyed: fishing. We got up early this morning, even though we’d only recently gone to bed the night before. Why is it that worms can’t be more considerate of my schedule and let me catch them earlier in the evening? Of course, we could buy the bait, but dad never wanted to spend money for something he had in rich supply in the backyard. “If you think about it,” he said, “the price of worms per pound would probably make them one of the more expensive meats on the market.” There was wisdom and truth in that comment, but I wasn’t sure I wanted to think about it in those terms.

On the bright side, our early start and money saved did allow us to splurge for a cup of coffee on the way. Dad doesn’t understand my need for cream in my coffee, but thankfully he doesn’t hassle me about it – a true privilege that comes from being the heir to his fortune. Properly caffeinated, we are ready to fish. 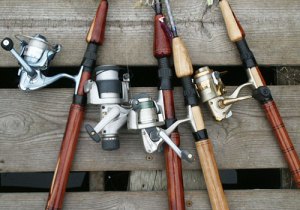 We have several spots we like to fish, but today we chose a spot in a park in Freeland. Dad’s leg is bugging him a bit this morning, so we thought the park would be more comfortable and easier to access. Plus this spot along the Tittabawassee River is usually good for catching a wide variety of fish, assuming we’d catch anything at all. We settled into our spot, baited our poles, including “mom’s” fishing pole with a Smoky-Link sausage and began our quest.

As we waited for the first bite of the morning, we started to talk. We’d never admit this out loud, but I think this is the real reason we both drag ourselves out of bed and drown worms in an attempt to convince fish to bite our hooks. I dominated the conversation today. I told him about the kids’ report cards: Wesley’s 4.0 GPA and Emma’s mastery of second grade. I could see he was proud of them. Too many people thought he wasn’t book smart so he’s very proud of their academic success.
As I finished telling him about the kids, he quickly raised his pole to set the hook on what he hoped to be the first fish of the day. As he reeled in his line he didn’t feel a fish tugging, but as the hook came into view we laid our eyes upon the first fish of the day: a 3” long perch. Dad is notorious for catching fish so small they would be considered bait in most aquariums, let alone a river. I laughed as he carefully removed the hook and sent junior back home to his mom. Dad laughed as I handed him his quarter for catching the first “fish” of the day.

We returned back to waiting and talking. He asked me about my job and I shared with him my frustrations with the merger and some recent decisions. He listened without jumping in to tell me what to do. Dad’s not a quick-fix guy and I appreciate that about him. He shared with me some stories of incompetent bosses he’d dealt with over the years while working for the city and encouraged me to hang in there. The one bit of advice he did give was to find a path toward a job where I could become my own boss. We talked more about those possibilities until he landed another fish – this time a nice 9” channel catfish. He’s up by two now, so I’d better shut up and start fishing.

And so the rest of the morning continued in much the same fashion. We talked about family, politics, baseball, and anything else that came to mind. I did start catching a few fish, and by the time the alarm on my phone went off, I had caught four fish to go along with his five (4.2 fish if you accurately value that first perch). I shut off the alarm, thinking about what a fantastic day of fishing we had shared. Then I rolled over, kissed my wife good morning and got out of my bed.

It’s been 5½ years since my father passed away and not a day goes by where I don’t miss his presence in my life. I’d give anything to have just one more morning of fishing with him. Despite our best efforts at planning, our lives lead us down paths that we simply cannot map out. My path afforded me 36 years with my dad. Some get more time while others get much less. So while there is nothing any of us can do to increase the length of time, we can all work to increase the quality of that time. If you are able, connect with your dad on this Father’s Day. Thank him for being the man of integrity God desired you to know. And if that gift is now gone, be still and thank God for the memories of love, leadership, and lessons learned.