I can do all things through Christ who strengthens me. – Philippians 4:13

I’m quite certain that most of you have not read Sir Francis Bacon’s 1597 work entitled Religious Meditations, Of Heresies. Well, neither have I. However, most of us are quite familiar with the most famous quote that hails from this work: “Knowledge is power.” It’s easy to see where Bacon is going with that statement. An uninformed person is more likely to make a mistake than someone who knows and understands what they are doing. This quote is a standard bearer for educators and anyone who supports life-long learning. As an educator, I have found myself promoting this line of thinking in most every class I have taught. However, in my experience I have come to a new realization.

Yes I am going to take on a knighted English author and philosopher. And with what evidence, what tool will I use to prove my point? For such a lofty purpose, I must select an intellectual whose body of work can hold up under the immense scrutiny. So in truth, I have but one logical choice: Han Solo. 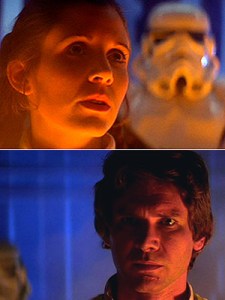 In the movie “The Empire Strikes Back,” Han Solo finds himself moments away from becoming a lab experiment. He is about to be encased in carbonite, just to see if a human can survive the process. Prior to being lowered into the chamber, Princess Leia reveals her true feelings for Han with a simple, “I love you.” Harrison Ford, the actor who played Solo in the movie felt the character couldn’t just reply in kind, so in one take he improvised the line that not only stuck, but became iconic.

What a curious thing to say. It conveys a bravado, a swagger on his part that is certainly consistent with his character, but where does it leave Leia? Insert the thought bubble and it might read, “Oh good, he knows. So now what?” In fairness, frozen in carbonite is no way to maintain a relationship, but in all honesty, his statement of knowledge – the admission of the information into his consciousness does not convey the reassuring message that would have been found in “I love you, too.”

How many people know something but still don’t do the things necessary to make the changes that would ultimately benefit them? I don’t like my weight, but I won’t diet or exercise. I don’t like my job but I won’t apply somewhere else. I have a problem with my husband/wife/girlfriend/boyfriend but I won’t sit down with them to discuss it. I am in pain or feel sick but I don’t want to see a doctor. All of these people have knowledge and insight regarding their situations, but all of the knowledge in the world isn’t helping them because they refuse to apply their knowledge into any concerted effort to make a change. Knowledge may be power, but power without action is like faith without works – it’s dead.

When it comes to knowledge, is there a better source than the word of God? What God reveals was spoken on our behalf, designed to empower us to do everything we were created to do. When we leave knowledge behind, when we refuse to fully act upon what God has revealed to us as truth, we not only miss out on the power of His word, but we impact others as well. To know but not to share can prevent others from having the fullest measure of the blessings intended for them through us. Jonah knew what God intended for Nineveh and his avoidance could have cost that city dearly. Of course, that’s where God stepped in, helping Jonah make a few course corrections that led him to do what God had intended. But while God’s will is going to happen, wouldn’t it have been better for Jonah to do what God wanted before becoming fish food? Talk about learning the difference between knowledge and action the hard (and smelly) way.

May we not only plug into the power of the knowledge of God, but then follow up by actively using that power to accomplish His will in our lives.

Author, Speaker, Educator, Husband, Father of two and follower of the One.
View all posts by day1of1 →
This entry was posted in Devotional and tagged A Mile in My Schu's, Action, Bible, Blessings, Choices, Christian Life, Christianity, Day 1 of 1, Devotion, Devotional, Devotionals, devotions, Empire Strikes Back, Han Solo, I Know, I Love You, Love, Philippians 4:13, Princess Leia, Religion, Richard Schumacher, Star Wars. Bookmark the permalink.

1 Response to I Know